In his blog entry for MindOut, Steve talks about how he’s used a range of different services from MindOut, from the Out of the Blue suicide prevention group to the Online Support Service, and each has helped in different ways.

I’ve had mental health problems since my teens so that’s over 40 years now. Since November of last year, it’s been one struggle after another with a range of problems. Luckily though, I’d moved to Brighton earlier in the year and when I started to have serious mental health problems, I didn’t hesitate to contact MindOut.

I’d been a fan of theirs from afar for a fair while but it’s only when you become a service user that you discover just what an amazing service they offer our community.  There wasn’t a long waiting list for help as is often the case with mental health services. After an initial chat, I was promptly invited to attend the open group session being held that week. 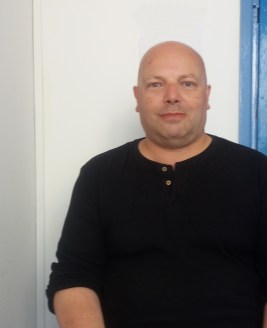 The groups gave me a different perspective

When it came to my first session at MindOut, I really didn’t know what to expect. It was towards the end of November and I was really struggling at that time with depression, suicidal thoughts and my self-harming was out of control. Pretty soon I realized that the group was going to be enormously beneficial to me and I’ve only missed one session since.

The chance to talk about how your week has been is hugely beneficial and you can just listen if you want to. You really miss the rare week they’re not held. I’ve learnt that receiving help from both the facilitators and other group members is so helpful and can make you look at situations from a different viewpoint.

My suicidal feelings meant that joining the Out of the Blue group was something I was keen to do. It’s like the open group but differs because it’s the same people attending over a nine-week block. You get to know the other group members and the ways in which each person helps the other is hugely helpful and at times very emotional.

The advocacy service at MindOut is another area that I have found incredibly useful. What’s more stressful? Hosting a dinner with the Mayor of Brighton or getting a GP? Last November both happened on the same day but it was the latter that I was most worried about. Thankfully I had my MindOut advocate Emma to help me sort out that GP, something I really needed at that point. That’s not the easiest of processes and the sight of those forms can easily get people running for the hills. Knowing Emma was there to guide me through them if I ran into trouble certainly eased an anxious situation.

There are many other ways that the advocates at MindOut can help service users. I’ve found that having Emma accompany me to important and potentially stressful medical appointments is important. It’s not so much the before or during that’s helpful but afterwards.  Knowing that after the meeting you’re not alone means everything. Being in a position where you can have a chat about what’s just happened is so important and you can plan what to do next.

“The knowledge that I can go onto the MindOut site and access online chat is vital. Not just to have someone to talk to but to hopefully distract me from what I wanted to do.”

The Online Service stops me feeling so alone

The online chat service has also proved to be a great help for me since becoming ill.  Many times, I’ve been at home depressed or fighting the urge to self-harm. At times like that I feel so alone and the knowledge that I can go onto the MindOut site and access online chat is vital. Not just to have someone to talk to but to hopefully distract me from what I wanted to do.

MindOut’s peer mentoring service which has been very supportive. My mental illness has gotten to the stage where venturing out on my own has become difficult. Having a peer mentor that I could either go with to a coffee shop, gay bar or ten pin bowling really helped me. Not just being more socially active but having someone to talk to and avoid bottling up my emotions.

The many posters MindOut produce illustrates how much they do for our community. Helpful workshops covering anxiety and depression and sleeping problems are so helpful. MindOut have proved to be a godsend for me since I became ill, long may their excellent services continue.

Talking About Mental Health For All

Getting to know the MindOut counselling service with Emmie Prosper

We are next online for LGBTQ mental health information and support on Thursday 22nd October from 3.30-7.30pm.