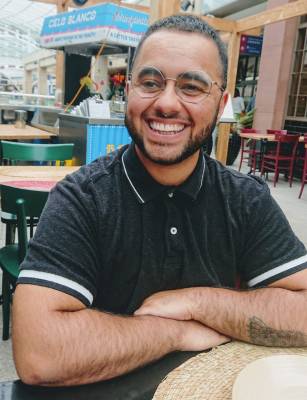 Ellis is one of the staff members here at MindOut who has been doing lots of amazing work. He helps facilitate the Trans, Non Binary, and BAME groups, as well as providing one-to-one support for clients. Recently, he has been working with Jalil, who gave us permission to share his story.

‘We have seen an increase in the number of migrants, refugees and asylum seekers we are supporting through advocacy work and through peer support groups. We currently run a fortnightly group for BAME LGBTQ people, and our advocates can support with issues such as navigating the asylum process.

Jalil came to MindOut after fleeing from Pakistan due to abuse from his family. Jalil was feeling isolated and wanted to meet more LGBTQ people, especially those who might understand what he was going through. He started attending the BAME support group, run by Ellis, and found it an extremely useful place to share his feelings and get support.

Ellis was also happy to write a letter of support for Jalil’s asylum claim, confirming that he was part of MindOut and that we had heard and believed his story.

Jalil has now been granted leave to remain in the UK.’

You can donate to support people like Jalil here. To nominate someone as a Queer Mental Health Hero, email [email protected] and follow the #QueerMentalHealthHero on Twitter to see each week’s nominee.

Getting to know our Online Support Worker, Olivia Hancock

Workshops for LGBTQ workers and volunteers

In conversation with Hannah, our Community Mental Health Advocate

We are next online for LGBTQ mental health information and support on Monday 10th August, from 5.30pm until 7.30pm.